My last post discussed doing web development with an iPad Pro and a VPS, and included Pythonista scripts for automating the creation/deletion of nodes on Linode. Today, I’ll show different versions of these scripts that can be used for starting and stopping EC2 instances.

The scripts assume you have an EBS-backed EC2 instance, which we will start and stop. Unlike Linode and others, EC2 instances of this type do not incur charges when stopped (other than storage), so our scripts will simply start and stop the instance you’ve already created.

To get started, first install boto, a Python library for accessing AWS. The easiest way I’ve found to install it is to run this script, which will install boto in Pythonista, in a folder called boto-module.

Then, in a different folder, save the ec2_start.py script:

Modify it to add EC2 instance ID you want it to start, and the AWS access key you want to use. You’ll be prompted on the first run to enter your secret key, which will be stored in the keychain.

The script will start the instance, and then poll every couple of seconds waiting for the public IP address to be available, which will be copied to the clipboard.

If you want to open another app when the script is completed, pass a URL as a parameter to the script such as workflow://, and that URL will be opened when the script completes. See the prior post for an example of how to do this with the Workflow app.

To stop the instance, use ec2_stop.py:

That’s it – pretty simple, and super convenient for starting and stopping EBS-backed EC2 instances from iOS!

As I mentioned last week, I’ve recently been doing a bunch of development and other work with the iPad Pro. This has generally been going very well – the only thing I have to go back to my Mac for, at the moment, is QuickBooks. (And yes, I know there is an online version of QuickBooks – however, there is one thing in it that didn’t work well for me last time I tried it, so for now I’m still using the desktop version.)

Part of what I do on a day-to-day basis is web development, using Ruby and Rails. To do this on the Mac I use Sublime Text, and a couple of terminal windows to accomplish what I need. If we break this down a bit, this is what’s needed for development:

I’ve been doing this using a combination of a development VPS running Linux, and a few tools on the iPad Pro. The main tool I’ve been using is Coda, which combines an editor, SSH client, and FTP client together in one app. In my experience, Coda is sometimes a bit buggy (random crashes, sometimes freezes for a few seconds at a time, sometimes line numbers go haywire), but for the most part it’s quite polished, and definitely worth using.

And Coda has one feature that really ties everything together – it can edit remote files (on my development VPS) directly, without having to explicitly transfer them. Don’t worry – I’m not editing live files on a production server; rather, I’m editing files live on a development VPS, and connecting to that dev machine using Coda.

When I want to make some changes to the site, I simply:

All in all, this works just as well as making code changes from the desktop – the only real difference is using the Coda editor rather than Sublime Text.

Optimizing the VPS workflow for Linode

I could just create the development VPS and leave it running all the time, waiting for me to connect and use it. However, it’s almost as easy to start and stop the VPS as necessary, and we’ll save a few bucks doing it this way. Plus we can have some more fun, with Pythonista, which was recently updated for the iPad Pro!

The steps and scripts below are for Linode (shameless referral link), but you can do this anywhere you like. Here are similar scripts for AWS/EC2. But for Linode, this is what we need to do:

You now have a saved image, that you can create a new VPS from any time you like. But that will be a lot of tapping around on the Linode Manager to do so…so instead, we can use a script (which uses the Linode API) to automate this, and run this script in Pythonista.

It turns out this script has to do quite a few things; creating a new node from an image in the Linode Manager hides some of these steps from you (like setting up a configuration profile), but we must do them all manually when using the API.

To get set up, first copy the api.py file from the linode-python GitHub repository to Pythonista. You can copy down the entire repo if you want, but the api.py is the part we need. Then, you can use this script in Pythonista to create a new node:

This script assumes it’s in the same directory as api.py, and further assumes the following:

You can change any of the above assumptions by editing the code on lines 20-26.

To make things a bit more automated, I run the script from a workflow in the Workflow app; here is a screenshot of the workflow I use: 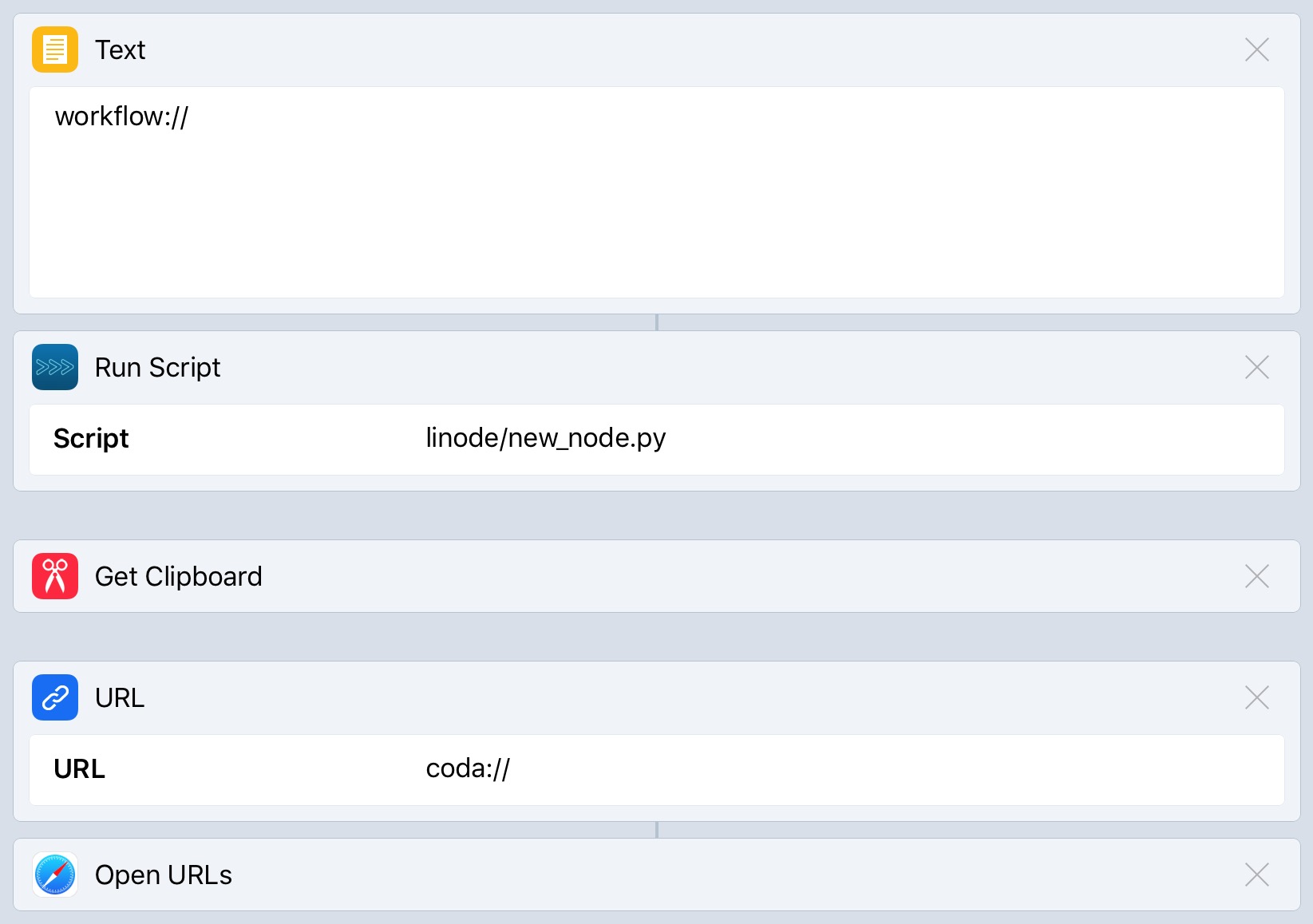 It’s quite simple – it just runs the Pythonista script, sending “workflow://” as the return URL, and then opens Coda, with the new IP address on the clipboard ready to paste into your site configuration. I add a shortcut to the workflow to my home screen, and I can spin up a new node with literally one tap. But if you want to, you could do the equivalent without using Workflow at all in this case.

We can also delete the node when we’re done, using another script; be careful with this one, and make sure you completely understand what it’s doing before you run it – if it finds a node called dev01 in the Dev group, it will delete it without confirmation:

Using these scripts and the apps I’ve mentioned, I’ve found development on the iPad Pro (with a keyboard) can be quite similar to the equivalent on a desktop.